It was a thrilling night for Dramacube students on Sunday 30th September at the annual Arts Richmond Swan Awards. 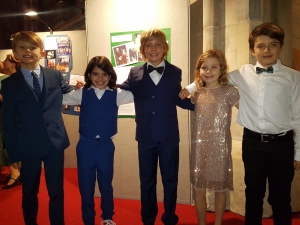 Nominees at the Swan Awards

Well done to all five students who received nominations, and to the entire cast of Annie Jr. which was nominated for Best Youth Production.

With students from Richmond, Twickenham and Hampton Hill casts nominated, it was an exciting night for all concerned, and huge congratulations go to Lili Ram and Daniel Nascimento who won the awards for Best Girl Performer and Best Boy Performer aged 14 and under.

The Arts Richmond Judges see many, many productions throughout the Richmond Borough with hundreds of young performers appearing in numerous shows, so to win the award is a great achievement.