This week at Dramacube, children were busy creating special effects for their film-making.  As well as learning well-known methods, pupils were encouraged to improvise their own ideas to record on film.  Here are a few examples of ground-breaking special effects from the big screen.

18″ models and giant hairy limbs were used to create the tortured ape.  Painstaking stop-motion, matte painted backdrops and multi-layered filming led to an action-packed and emotional interplay between characters.

A mixture of practical effects and early CGI helped to create the most memorable moments in the film.  The unstoppable molten robot, chasing down the car and the splicing together of the head were moments that sent shockwaves through the audience.  This shape-changing villain has aged well over the years and is still yet to meet his match!

A much-loved and iconic film, celebrated for many reasons, particularly the incredibly realistic tornado that transports Dorothy to Oz.  Special Effects Director, Arnold Gillespie, employed a 35 ft twisted muslin held up by a steel gantry and moved horizontally from side to side by a steel rod at the bottom.  An avid flier, Gillespie was inspired by the sight and movements of windsocks at the airport. 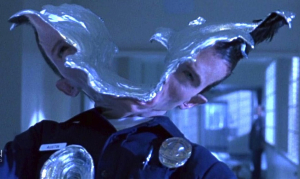 Carlo Rambaldi designed the animatronics for ET.  A Team of people controlled the movements of the face and two little people were employed to wear the costume.  This iconic marvel cost $1.5 million to make- the investment paid off and he is still loved to this day!

Ironically, the defining moment of the film- the main characters silhouetted as they fly across the dazzling moon, was incredibly simple.  A shot was taken of a low full moon and the riders were added, post-production!