The Psychology of Colour in Film 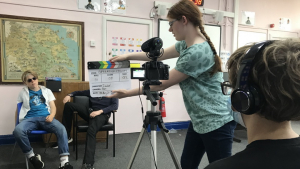 Filming started this week at Dramacube Movie-makers!  There was so much to bring together including; scriptwriting; camera work; acting for screen and costume.

Since the dawn of Technicolour in Hollywood, costume and more importantly, the colour of costume has been used to convey meaning in film.  Early films, such as The Wizard of Oz, can be seen as a celebration of colour- with its richness and variety.  The Horse of a Different Colour scene, was almost a celebration of what could finally be achieved.  Since that time, Costume Designers have used colour to convey layers of meaning in clever and subtle ways.

Red has often been used to represent danger and violence in film.  Little girls in red duffle coats are often used as emblems of worry and terror.   Steven Spielberg’s use of red against the black and white backdrop of Schindler’s List, drew the audiences’ attention and encouraged an emotional response.  M. Night Shyamalan uses red to signify the presence of a ghost in The Sixth Sense.  The balloon, the tent, the cellar door knob that refuses to budge, the blanket and the top worn by Malcolm’s wife are all strategically placed to symbolise trouble.

Pink on the other hand represents innocence and femininity.  This has been used sincerely in films like Legally Blonde but clearly turned on its head for Mean Girls.

Yellow carries an array of meaning depending on the tone.  The mellow yellow in The Shining is said to highlight madness but the richness of Alicia Silverstone’s school outfit displays energy and naivety.  The depth of the yellow dress in Elizabeth: The Golden Age could be historically accurate but also carries connotations of madness and illness. 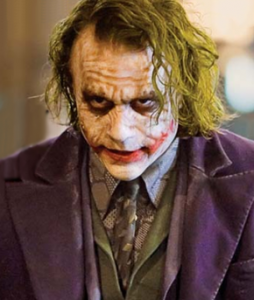 Heath Ledger as The Joker

The colour purple is often worn in fantasy and adventure films.  Seen as a rather mysterious colour it can be used to dress both good and evil characters, as witnessed by the Joker’s purple suit, the stylish wig worn by Hit Girl and Hulk’s purple trousers.

Celebrating Charles Dickens with a Twist!
Scroll to top