Theatre & children provided great inspiration for Shirley Hughes CBE who was one of Britain’s beloved authors and definitely worth celebrating.  With a career spanning more than 70 years, Hughes was able to touch the lives of generations through her stories of early childhood. 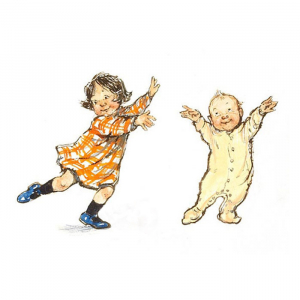 The Theatre of Children

Hughes was born in West Kirby, on 16 July 1927.  Her father was the owner of a very famous department store (TJ Hughes) in Liverpool that made shopping more affordable for working class people.  Shirley’s mother, Kathleen, loved theatre and would often frequent the local playhouses with her daughter.

Inspired by local art galleries and theatres, Hughes decided to study Drawing and Costume Design at Liverpool School of Art.  She also attended the Ruskin School of Drawing and Fine Art in Oxford. Initially focussing on set design and costumes, Hughes was encouraged into the world of illustration by her tutor, and everything clicked into place.  Hughes felt that by choosing picture books, she could combine her love of both theatre and art because, “A book could be a little theatre.”

Inspired by a love of theatre

Hughes started off illustrating books for other authors, including My Naughty Little Sister, by Dorothy Edwards.  Lucy and Tom’s Day was the first book that she both wrote and illustrated.  Shirley Hughes went on to illustrate more than 200 children’s book which sold 10 million copies- Alfie and Dogger being the firm favourites amongst fans.  Hughes also went on to write books for young adults and novels.

Hughes married her husband, John, in 1970 and moved into a townhouse, in a rundown, Notting Hill.  The house had a communal garden which was always full of children, and they went on to have 3 of their own- one of which became an illustrator themselves!

Dogger, written in 1977 was recognised by the Library Association’s Kate Greenaway Medal as the year’s best children’s book illustration by a British subject and voted the Greenaway of Greenaways in a public vote of the top ten all-time favourite children’s book.  Hughes was awarded a 2nd Greenaway for Ella’s Big Chance in 2003.  The first ever BookTrust Lifetime Achievement Award was presented to Hughes by Michael Morpurgo in 2015 and she was awarded an OBE and CBE for her services to literature.

If you think your child or teenager could be inspired by theatre please click here.

The Benefits of Role Play