After weeks of rehearsals and hard work, Matilda Jnr the Musical finally hit the stage this week and was met with rave reviews!  Five casts, of “revolting children”, came from all across Twickenham, Hampton, East Molesey and Teddington to impress audiences with their singing, dancing and acting skills.

Matilda Jnr the Musical really does have everything.  The play has humour and heart and is truly inspiring on so many levels.  At face value it is a story about magic but also covers challenging topics, such as defiance, bullying, abuse of power, neglect and hope.

By inspiring a generation of children to think beyond their size, with powerful lyrics such as, “Just because you’re little you can do a lot you..”, Matilda covered new territory.   My daughter has been mesmerised by both the rehearsals and the shows.  Enchanted by the performances of the cast, she has come home every time, singing and dancing.  But not only that.  In quieter times I have found her, sitting in a corner for half hour stretches, reading books and pretending to be like Matilda. 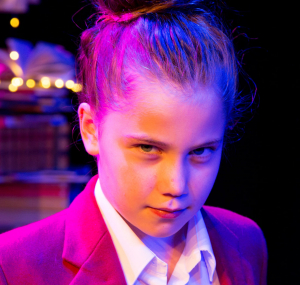 Even as an adult I have found myself moved and motivated by some of the songs.  Statements such as “Nobody else is gonna put it right for me.  Nobody else is gonna change my story…”  have given me a bit of a wake up call and spurred action over procrastination.

Matilda Jnr the Musical is loved by the actors who perform it and enjoyed by the audiences who watch it.  But like a true work of art, what makes it particularly brilliant is that each individual will come away from it with something different, which makes it truly unique.

If you have been inspired and would like to come and have a go, why not try a Dramacube taster?  We look forward to seeing you there.