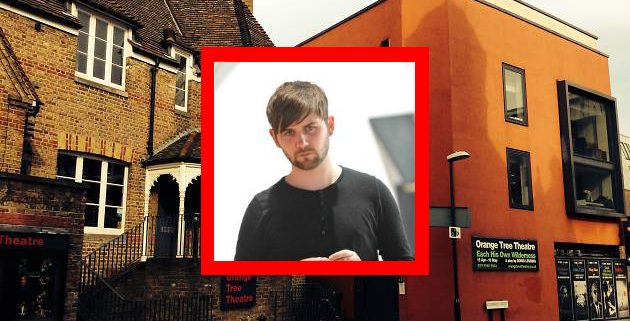 This week we had the pleasure of speaking with Alex Thorpe who will direct Twelfth Night at Orange Tree Theatre in Richmond. The production will run from 18th to 25th March as part of the Shakespeare Up Close Series, a series of productions which aim to make Shakespeare relevant to a younger audience today. Alex has previously worked at the Royal Shakespeare Company and Shakespeare’s Globe.

Q1) Did you always know you wanted to become a director and if not what other paths have you followed?

I’ve always known I wanted to work in theatre. Well, at least from the age of 11. However at that age it was just an outlandish ambition. Kind of like wanting to be an astronaut. But I went to a fantastic youth theatre in Kendal, where I grew up, and had the most amazing drama teachers who did nothing but encourage and support. By the time I was doing my A-levels I realised it was the making of plays that I enjoyed the most, rather than being in them. And from 18, I left home and moved to London where I studied at the Central School of Speech and Drama and have put all of my energy into a making a career as a theatre director ever since then. I sometimes have a fantasy that one day I might do something different. Run a pub in the countryside (Like my parents did). Only time will tell…

Q2) Most of our shows at Dramacube are rehearsed once a week.  How long was the rehearsal period and what was the process?

We are in the middle of our first of three weeks at the moment. So I’m not 100% what the entire process will be. I like to respond to the people I have in the room. Listening to and learning about what they need and want from me. In my opinion, actors should be at the centre of every rehearsal process. I like to instil a sense of play and mischief in my rehearsal room. Experimentation, which encourages actors to explore and play for as long as possible, discovering a wide range of possibilities and options, not necessarily sticking to the first thing they come across. It’s my job to look at the bigger picture and help steer, when necessary. Saying all of that, whenever I work on a Shakespeare, I like to spend some time at the beginning of the rehearsal period translating the text, which is what we have been primarily doing up until now. It’s more fun than it sounds, I promise.

Q3) Have there been any moments during the rehearsals when something has gone wrong and how did you and the other actors deal with it?

I’d be devastated and doing my job completely wrong if ‘things didn’t go wrong’. Usually what happens when things ‘go wrong’ is that we discover something brand new and much more interesting that we had planned. So when things ‘go wrong’, we embrace them and celebrate. It usually means the actors are being brave. Experimenting. Playing. How can you find out what’s rights, if things don’t go wrong?

Q4) What will the set be like and how closely do you work with the set designer for Twelfth Night?

Ah, the set is a bit of a surprise. You’ll have to come and see it if you want to know that. But I will say, Max Johns (the designer) and I have given ourselves the freedom of not rooting the play down in any specific time period. So you will see a nod to the 90s and 80s but I’m far from adverse to skipping back 400 years from time to time too. Max really is a true collaborator. It’s been wonderful discussing every aspect of the play with him. Like every good and healthy collaboration, our roles cross over. We talk about rehearsals. We talk about the set. It’s fantastic to be able to enjoy that luxury.

Q5) How have you found working at Orange Tree Theatre and how does it compare to other theatres that you have worked in?

It’s no big secret: I’ve wanted to work at the Orange Tree ever since Paul Miller took over. They didn’t win ‘Most Welcoming Theatre’ for nothing. As soon as you step through the doors, both as a patron and as a visiting director, you are welcomed with open arms from their generous, hard-working staff. That atmosphere creates joy, which is an amazing environment to create work in. It’s cultivating. I must admit, I have been very lucky to work and have been welcomed in to some brilliant and friendly theatres. The Crucible, Tricycle, Almeida, Little Angel, The Old Vic, the RSC. But there is definitely something very special and unique about what Paul and his friendly team are doing in Richmond.

Q6) What advice would you give to students thinking of getting in to directing?

See as many plays as you can. I know it’s not the cheapest thing in the world but there are so many deals. Schemes like £12 tickets at the Orange Tree Theatre, Entry Pass at the NT, 10p standing tickets at the Royal Court, Pay What You Can evenings at the Arcola and Theatre 503, all make the London theatre scene inclusive. Read as many plays as you can. All different plays. Go to your local library and grab a random play from their drama section. The Bush theatre have a whole wall of plays in their foyer that you can go along and read for free whilst you’re there. It’s all about getting to know what your tastes and preferences are. Then do as much as you can. Not just directing but theatre in general. Stay in youth theatre for as long as you can. Learn about directing from being on the stage, feeling how the stage works. Start forming an opinion on what it is that is successful about the way the director that you’re working with works. And then, when opportunities arise, start working with actors. Exercise that voice you’ve been nurturing. There are wonderful opportunities across London for emerging directors. Nights like Miniaturists at the Arcola or Rapid Write Response at Theatre 503 put together new writers and new directors and stage, often brilliant, 10 – 15 minute plays in front of a full house.

Q7) Looking ahead, what is next in the pipe-line or what would be your next dream job?

What’s next is not yet announced so I won’t give too much away. But working at the Orange Tree marks a year of me more regularly making my own work, having primarily worked as an assistant/associate director for the past 2 years. In the summer I’ll finally stage a new play written by a great new writer. Something we’ve been developing for a couple of years. In the autumn I’m hoping to stage the first revival of a play first done at the start of the millennium. But the dream job? Well, I’m very happy concentrating on staging plays at the moment. New plays, old plays, modern plays, classic plays. But one day I would like to be an artistic director of a building. But that’s a little while off yet.

We’d like to thank Alex for his time and wish him the very best of luck with Twelfth Night and with all future projects. We also have a competition to win a pair of tickets to see the show.

Tink on Tour…
Scroll to top