We are delighted to confirm that we have received an incredible five nominations in the 2018 – 19 Arts Richmond Swan Awards. 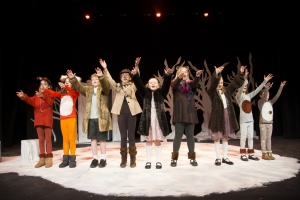 We first staged The Lion, the Witch and the Wardrobe in December 2015 at Hampton Hill Theatre.

Always a popular choice for a Christmas show, we decided to apply for the performance rights again when writer Irita Kutchmy kindly granted us permission to edit the show, making it more suitable for a large cast.

Congratulations to all of our casts in Twickenham and Hampton Hill.  We are delighted your hard work, commitment and talent has been recognized with this nomination.

Best Girl Performer Aged 14 or Under –

Daisy Allen for the role of The White Witch in The Lion, the Witch & the Wardrobe. Hampton Hill Theatre, December 2018. 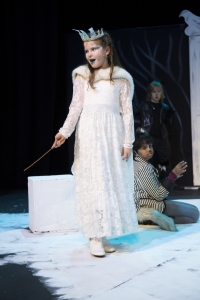 Daisy Allen as the White Witch

This was Daisy’s debut production with Dramacube Twickenham, having only auditioned a few months earlier.  The White Witch is a huge role, central to the plot and carries lots of responsibility for the actor playing the part.

Daisy did exceptionally well to land the role, particularly as she was up against many other actors with considerably more experience.

She gave an excellent performance and we are delighted that her efforts have been recognized with this nomination. 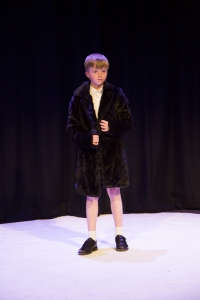 Best Boy Performer Aged 14 or Under –

Adam Gaunt for the role of Edmund in The Lion, the Witch & the Wardrobe. Hampton Hill Theatre, December 2018

In taking on the role of Edmund, Adam was challenged with a character whose actions are pivotal to the plot and represent god verses evil as he changes from greedy to brave, the central theme of the story.

This was a huge role which Adam fully understood and gave a fine performance, initially as the selfish boy who betrays his siblings, then the contrasting hero demonstrating bravery.

We are delighted Adam’s achievement with this role has been recognized with a Swan Award nomination.

Finn Bralow for the role of the Genie in Aladdin Jr. Hampton Hill Theatre, March 2019

With Hollywood names such as Robin Williams and Will Smith associated with this role, there can be no doubt of the talent required to 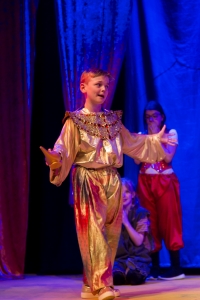 carry it off and Finn, with his charismatic portrayal of this iconic character proved to everyone that he is a true all-rounder, highly capable of playing such a leading role.

His performance was both entertaining and authentic and we are delighted that the Swan Judges have recognized his talents again. 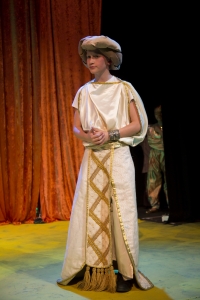 The Sultan is Princess Jasmine’s father and the pompous but kind ruler of Agrabah.

It is believed that some characteristics of this role were inspired by the Wizard of Oz (Our next production!), to create a bumbling authority figure and Ethan demonstrated these traits perfectly as he struggled to rule not only his kingdom but his feisty daughter Jasmine.

As an older character, this is a particularly challenging role for a young actor to play and we are delighted Ethan has been nominated for an award.

The Swan Award judges watch around 240 productions each year and see many, many youth actors so to receive a nomination is a tremendous achievement and we congratulate our talented young performers on receiving this recognition.

The award ceremony will take place on Sunday 15th September at the Landmark Arts Centre in Teddington and we wish all of our nominees the very best of luck.

K’ja Young Thomas to Choreograph The Wizard of Oz

The Wizard of Oz Costume Designs
Scroll to top