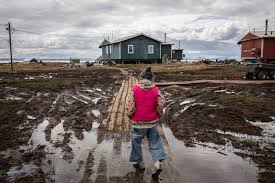 The stage is set.  The costumes are made.  The actors have been hired.  Rehearsals for Ellie and Starlight’s Christmas Adventure are well under way.  The play is a sequel, of sorts, to Ellie and Starlight the Musical which was shown at Hampton Hill Theatre in 2019.  Of sorts because the sequel is not a musical and the main focus is Christmas rather than climate change.  It opens with a brief reference to the final outcome of the original show- Ellie’s village having to move as a result of global warming.  Both shows are based on a picture book I wrote several years ago and the origin of that story is anything but fiction!

Whilst studying for an ill-fated Teaching degree I came across an article about the world’s first climate change refugees.  It outlined the plight of the Yupik Eskimos of Newtok Alaska- having to move from their native village.  Rising temperatures had caused the permafrost beneath their feet to melt and their houses were literally sinking into the earth.

Instantly I was overcome by an overwhelming sense of guilt.  The Yupik people exist without the excesses of the Western world.  They live a rather dichotomous existence; balancing precariously between a native and modern life. For example, some homes have televisions but running water is only available at the village school.  And yet, these are the people paying the price for modern man’s abuse of the planet.

Having written stories before, I decided that I should try and share their story through the medium of a picture book.  If I could travel the country teaching children about climate change maybe it could help in some small way.  Despite great interest from social media and re-tweets from the likes of Sarah Jessica Parker, the publishing companies didn’t share my passion.  But Dramacube did, and since that time the story and characters have been brought to life in 2 different plays.

Believe it or not, 25 years later the relocation is partly underway but limping along slowly.  It would seem that governments fail to write policies or provide funds for villages displaced by climate change.  At $100,000000 it is a huge amount of money to raise and manage and who would want to bear responsibility for it?  The Yupik people attempt to keep moving forward towards an uncertain future.  They do their best so I will endeavour to do mine in continuing to share their story.

Christmas Around The World

Rave Reviews for Matilda Jnr the Musical!
Scroll to top