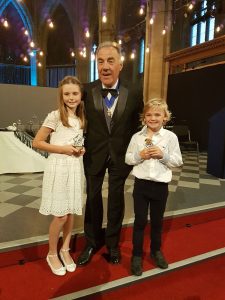 Milly Stephens and Finn Bralow won Best Girl Performer and Best Boy Performer aged 14 and under at the 2016-17 Richmond Arts Swan Awards.  Milly and Finn were among six Dramacube actors who received nominations.

The annual award ceremony celebrates theatre throughout the Richmond borough.

After receiving his award, Finn Bralow, with a huge smile on his face, said “I feel so proud and I couldn’t have done it without my parents”

Receiving six nominations, including Best Youth Production, was a tremendous honour for us.  We’ve produced seven major productions over the past two and a half years. During that time we’ve worked with so many talented performers. As a result it was wonderful to see some of our young actors being recognized for their hard work and commitment.

Two-time nominee Tom Stephens aged 9 said: “Dramacube is like a second family to me. Since my first production in 2015, it’s been a big part of my life. It feels like I’ve been with Dramacube for longer than 2 years. I know the team so well and they have been so supportive of my achievements.”  Tom has starred as Schlomo in Fame Jr., Edward in The Lion, the Witch and the Wardrobe, Warbucks in Annie Jr., Mr. Wormwood in Matilda and Hook in Peter Pan. He is currently rehearsing for The Queen’s executioner in Alice in Wonderland at the Rose Theatre, Kingston.

Ross Westgate, father of Swan Award nominee Amber Westgate said: “Dramacube is a brilliant opportunity for young people to discover or improve their acting abilities in a fun, friendly and welcoming environment. The confidence that can be gained from performing, for any child can be an important factor in their overall development. ”

We are incredibly proud of all our young actors. We look forward to many more wonderful productions.