Back in 2018, Dramacube ran a term of musical theatre classes in preparation for a production of Disney’s Alice in Wonderland.  The quirky, fantasy story was brought to life through cast members singing, dancing and acting out the musical adventure.  This week will be Lewis Carroll’s birthday so let’s celebrate by looking back at his life.

Lewis Carroll was born Charles Lutwidge Dodgson on January 27th 1832 in Cheshire. One of 11 children, his childhood was a happy one! He often created games and stories in order to entertain his family in their isolated countryside residence.

Carroll was bullied at school, largely due to a stammer and several other illnesses and disorders. At Christ Church, Oxford, he excelled at mathematics and went on to lecture there. 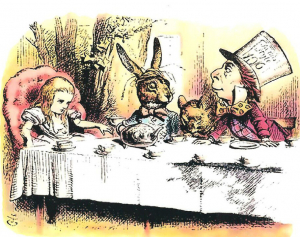 Carroll favoured the company of children.  In fact, the memory of an afternoon spent with one such child, Alice Liddell, inspired the script for Alice’s Adventures Underground.   Originally written as a gift to the child, the manuscript was spotted by a fellow writer who urged Carroll to visit a publisher.   After some publishing mishaps, the book was finally published as Alice’s Adventures in Wonderland in 1865.  This was swiftly followed up by a sequel, Through the Looking Glass and What Alice Found There, in 1871. Other novels followed but were not well received.  By 1932 Alice was arguably one of the most famous books of all time.  Dodgson also wrote books on mathematics, poetry, humorous verse and did well with his photography.  However his name will always be synonymous with Alice.

Musicals, films, cafes, homeware…never before has a work of fiction inspired so many people and so much merchandise!  Disney was obviously the most impressive of all but most high street shops have some Alice produce in some form or another.  But what with the characters, the colours and the imagery it is no surprise!

If your child would like to step through the looking glass into a world of musical theatre, please click here!

The very best of Cinematic Illusion.
Scroll to top