The final two drawings for Annie JR. which set designer Sally Somerville-Woodiwis has included take on a more abstract feel.

The image to the right (4) is once again based on a general set up.

I have used a sheet with wallpaper print for Warbucks’ mansion.

I really like all the images of the washing lines between streets from the 1930’s.  So I thought we could change the scenes by pulling washing lines across the stage and have 3 or 4 large sheets that have a background for each scene on them.

As an example, for Warbucks’ home a rich wallpaper printed onto a sheet, for the orphanage a disintegrating wall texture on the sheet and for the Hoverville / street scenes a painted image of the bridge.

I’m still thinking of having a city-scape behind the sheets, it could even give some nice silhouettes onto the sheets if lit form behind.

I’ve attached the ‘washing line’ from the left poor house to the mansion on the right and moved the offices down stage in the corners. 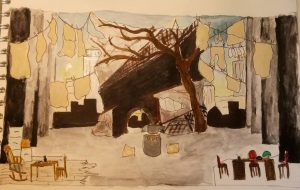 This is similar to the above but without the buildings either side and more washing lines.

Also instead of it pulling sheets across large sheets would fly in which reduces the burden on the actors to change the scene.