Would you like to act, sing & dance this Summer away? Well look no further as Dramacube are offering a wide variety of holiday workshops for 4-6 & 7-14yr olds.

Encanto will be inspiring workshops for both age groups and during my research I’ve discovered a little gem of information about that fantastic film.  Each character’s costumes have details on them to symbolise their super powers.  For example:  hourglass figures highlight Bruno’s ability to see into the future, while Isabella’s floral dress references her ability to control plants.  Next time you watch the film, take a closer look and see if you can spot the others. 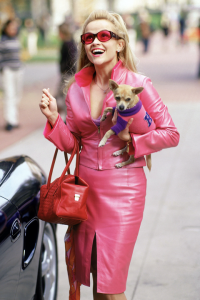 In the meantime, let’s discuss the symbolic use of costume in other films.

When you think of Elle Woods, you probably think pink and shiny! The Costume Designer used bright and vivid colours to reinforce Elle’s vivacious and outgoing personality.  However, more subtle is the change in tones and styles as the film progresses.  Elle goes from candy coloured, brassy fabrics with curly hair to more muted tones, softer fabrics and a stylish straight pony tail.  This clever transformation supports her character development throughout the film but the original look will always remain much more iconic!

Dolores Umbridge’s scarf hints at her secret inclinations.  The scarf she wears has the length of a snake but the head of a cat, thus hinting at her feelings towards Lord Voldemort. 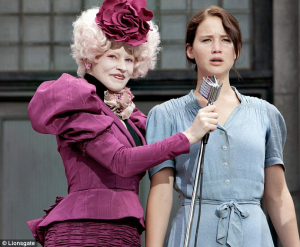 Effie Trinket is always wearing bold colours and striking outfits.  This rich display hints at wealth, but also the restrictions of the regime, as she is always gripped by chokers, sinched in by corsets waistlines and tottering about on towering heels.

The purple suit worn by the Joker in Batman is meant to be unsettling as purple is often perceived as mysterious and linked to the supernatural elements of life.  Perfect for the psychotic Joker!

The Wizard of Oz

The blue gingham dress worn by Dorothy is said to symbolise optimism.  It stands out nicely in the technicolour world of Oz but when you picture it in those early Kansas scenes you realise how Dorothy would have represented a stark contrast to the greys and browns of the American Depression.  This was meant to symbolise public desire to escape the dust bowl and finally move towards the American Dream.

Theatrical Workshops for Kids this Summer!
Scroll to top