Excitement prevails this week across Hampton, Teddington, Twickenham and East Molesey as Dramacube’s performing arts classes start up again.  Students will sing, dance and act their way through each inspiring session.  Don’t forget, casting will soon be under way for the musical theatre sensation that is Aladdin Jr, so sign up quickly!  In the meantime here are some interesting facts for you:

Aladdin is a very old man!

The story of Aladdin is centuries old because it forms one of the tales told in The Arabian Nights.   Famous other tales include, Sinbad the Sailor and Ali Baba.  There are 1001 tales in total!

Aladdin is quite the Nomad!

The original book of tales dates back to the 10th century AD.  The tales were gathered from North Africa, Turkey, Persia, India and East Asia.  Antoine Galland translated the Arabic version into French in 1712.  In both French and English versions, Aladdin lives in China.  Aladdin to Arabia in the Early 20th century via cinema.

Early text versions describe the central character as shallow and lazy.  A far cry from the clever, loyal hero of the big screen!

An Aladdin with low morals?

The original tale saw Aladdin attempting to bribe the Sultan for his daughter.  Failing that, Aladdin kidnapped the Groom until he finally relented!

The characteristics of the Genie were moulded around Robin Williams.  Williams also improvised most of the lines and the character went on to become a firm favourite in the film. 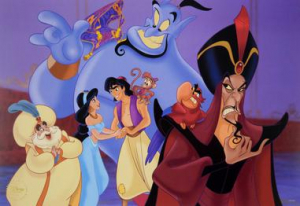 The original film sparked racial controversy because of negative stereotyping.  Successful campaigning led to offensive lyrics being cut from the opening song.  Several visual issues still remain.  Disney has recently added warnings to the opening credits of many of their older films.

To get on board the magic carpet ride, click here.